"I felt my lungs inflate with the onrush of scenery - air, mountains, trees, people. And I thought; this is what it is to be happy."

In New York State, The Adirondacks are the premier destination for people who love the outdoors. More visitors travel to the region each year, with a growing number seeking to own a second home as an escape from city life or suburbia. To address that demand, First Columbia has begun construction on Phase One of the Owaissa Club, a new townhouse vacation community on the banks of the AuSable River’s famous West Branch.

The development takes its name from the original Owaissa Club. Formed in 1920, the Club served as a place in Wilmington for youngsters to meet and play in a safe and fraternal environment. Youths enjoyed row boats and canoes on the AuSable, movies, music and literature, as well as outdoor fireplaces. All of those things have endured at the Lake Everest Park, which is situated on the current Club’s neighboring property. New

Club members will be the closest residential units to this hidden gem of the Adirondacks.
The current Owaissa Club has parallel goals to its progenitor; bringing twenty-seven families to continue a tradition of friendship into the twenty-first century. 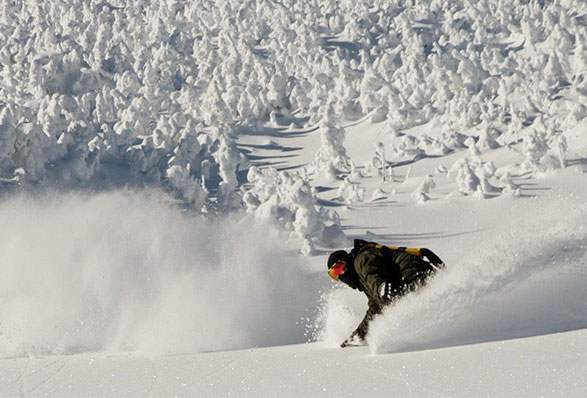 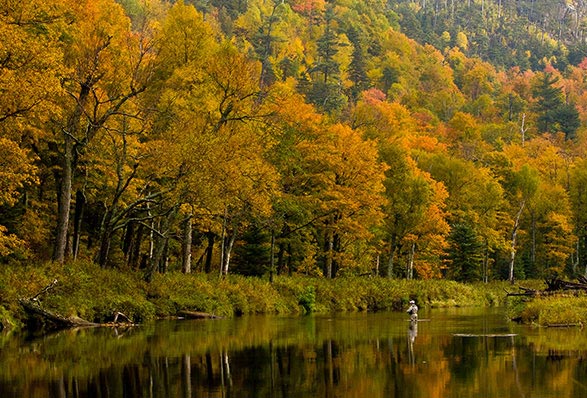 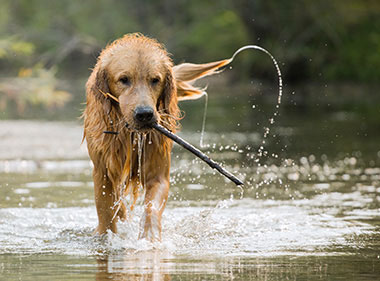 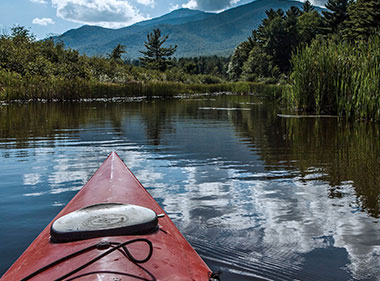 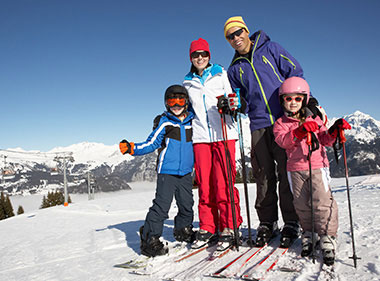 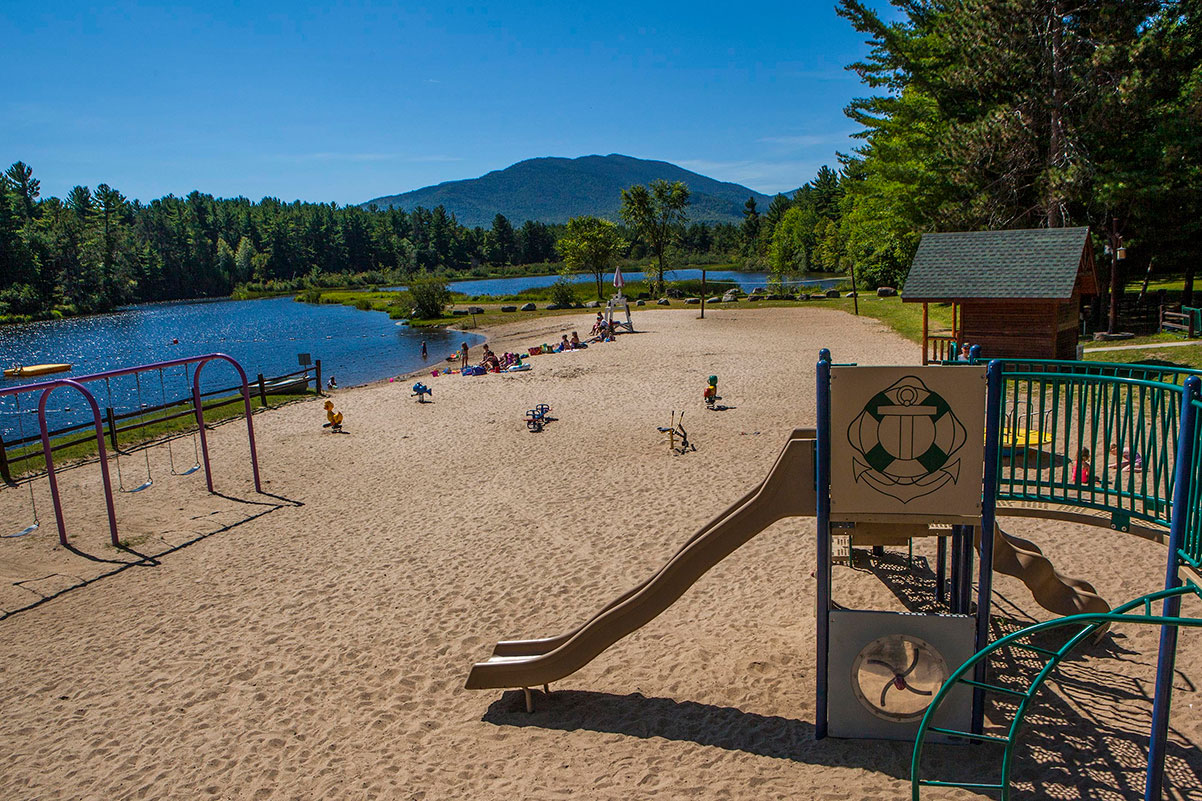 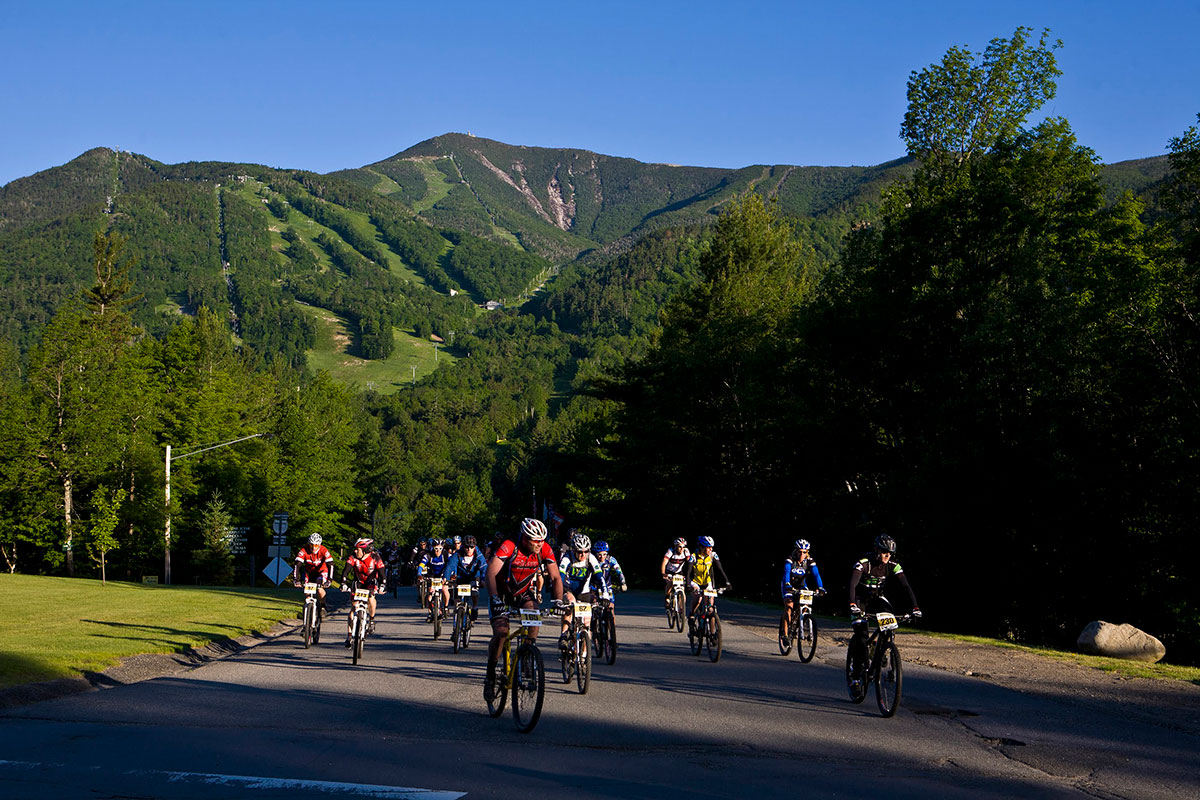 Canoe, kayak or fish the AuSable river, or enjoy a riverside day at the beach. Owaissa Club is next to Whiteface Mountain and just a short ride to Lake Placid. 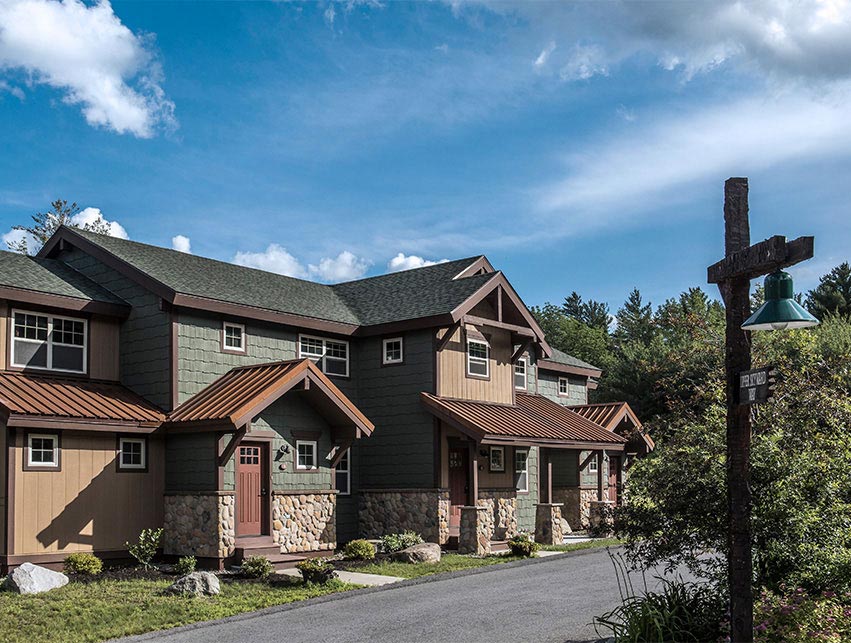 Adirondack living at its finest

.
The Owaissa Club offers three well-designed, Adirondack-style floor plans which include two- and three-bedroom set-ups. Each layout can include a wide array of upgrades. For the owner with his or her own design in mind, there are several custom options available. These elegant and spacious town homes provide ample living and storage space, perfect for a weekend getaway, or an extended stay with family.
Two Bedroom Three Bedroom 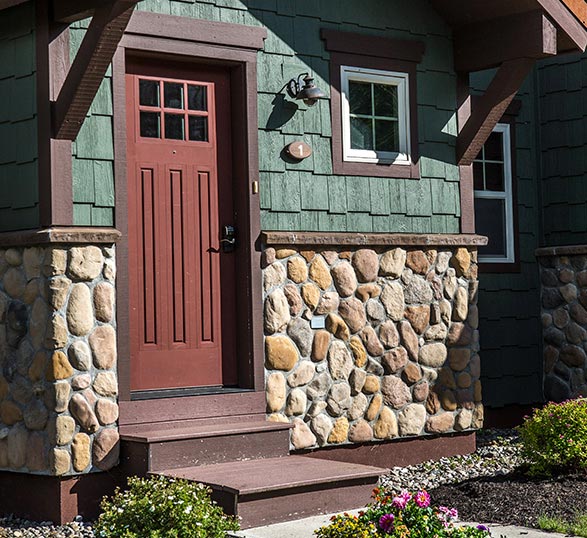 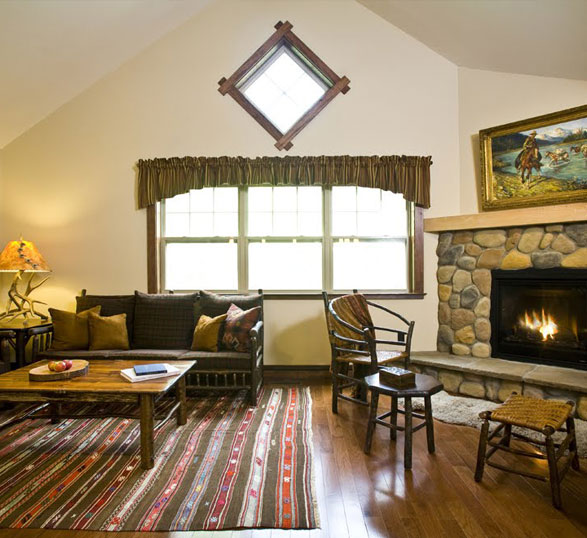 The Owaissa Club Vacation Rentals are nestled in the Adirondack Town of Wilmington, NY, just 10 minutes south of Lake Placid. The rentals offer an abundance of outdoor amenities that any traveler would desire. Whether it is skiing at Whiteface Mountain (just 2 miles down the road) or fishing the West Branch of the AuSable River (water access available) you’ll enjoy all seasonal activities at the Owaissa Club Vacation Rentals.

Our rentals offer guests top notch accommodations providing hotel amenities yet still holding onto the Adirondack charm and coziness of the surrounding Whiteface mountain. All units have been professionally furnished by Dartbrook Rustic Goods of Keene, NY. 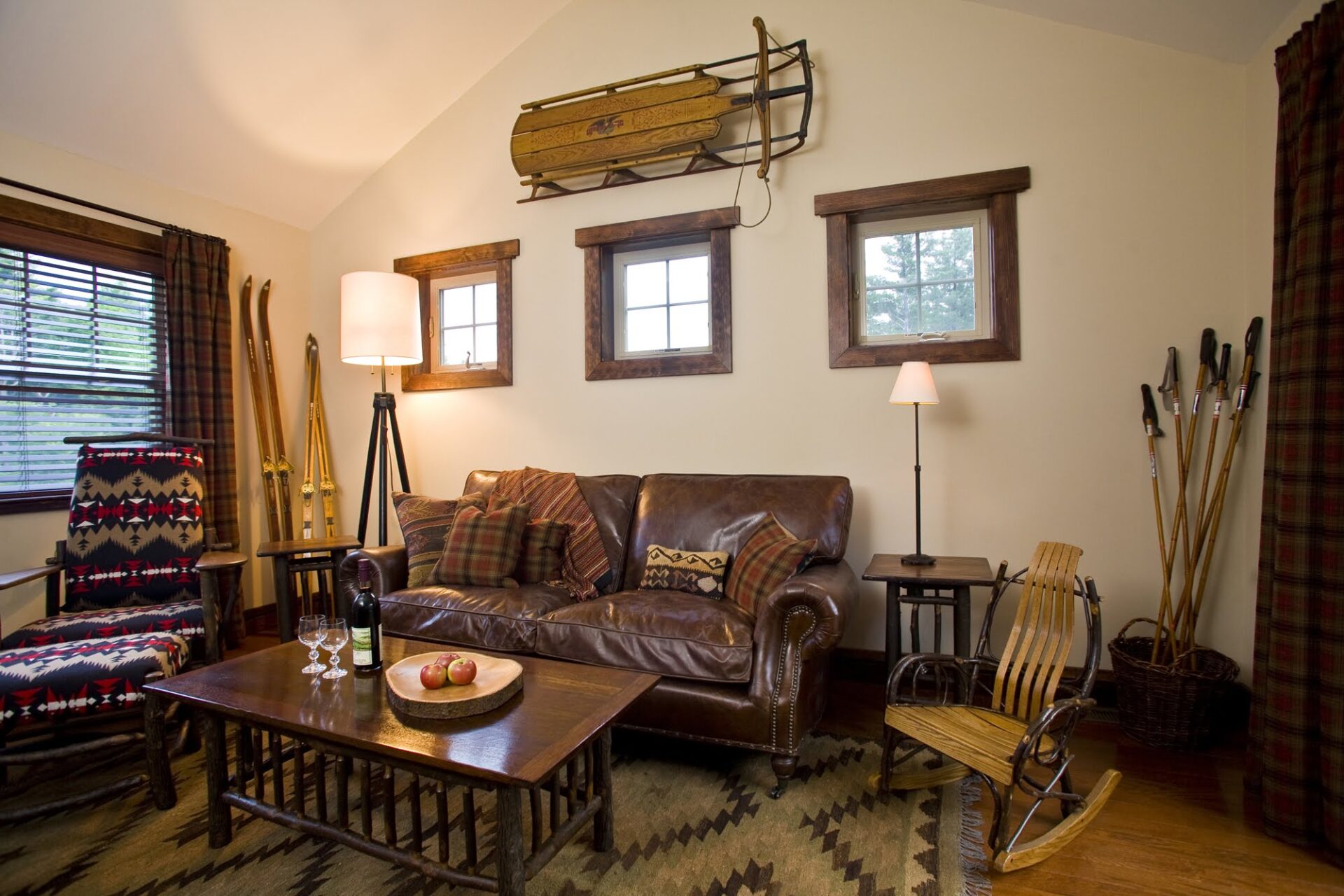 The Owaissa Club vacation townhomes, nestled in the Adirondack Town of Wilmington, NY make the perfect four season vacation rental home. 1 Upper Skyward Way is a 4 Bedroom 3 Bath townhome that sleeps up to 10 guests. This charming town home has beach access to the AuSable River, spectacular views of Whiteface Mountain, and is our most sought out unit! The home includes: a fireplace, bedrooms on first floor space, large deck patio, BBQ, hard wood floors, spacious layout and design, professional furnishings from Dartbrook Rustic Goods, and much much more! The location of the home offers our guests an abundance of outdoor amenities that any vacation would need just outside their front door! Whether it is skiing at Whiteface Mountain (closest rentals to the mountain) or enjoying beach time on the AuSable River (water access available) you’ll enjoy all seasonal activities at the Owaissa Club. Our homes offer guests top notch accommodations providing hotel amenities yet still holding onto that Adirondack charm and coziness of the surrounding mountains. All units have been professionally furnished by Dartbrook Rustic Goods of Keene NY.
view gallery
Book Your Stay 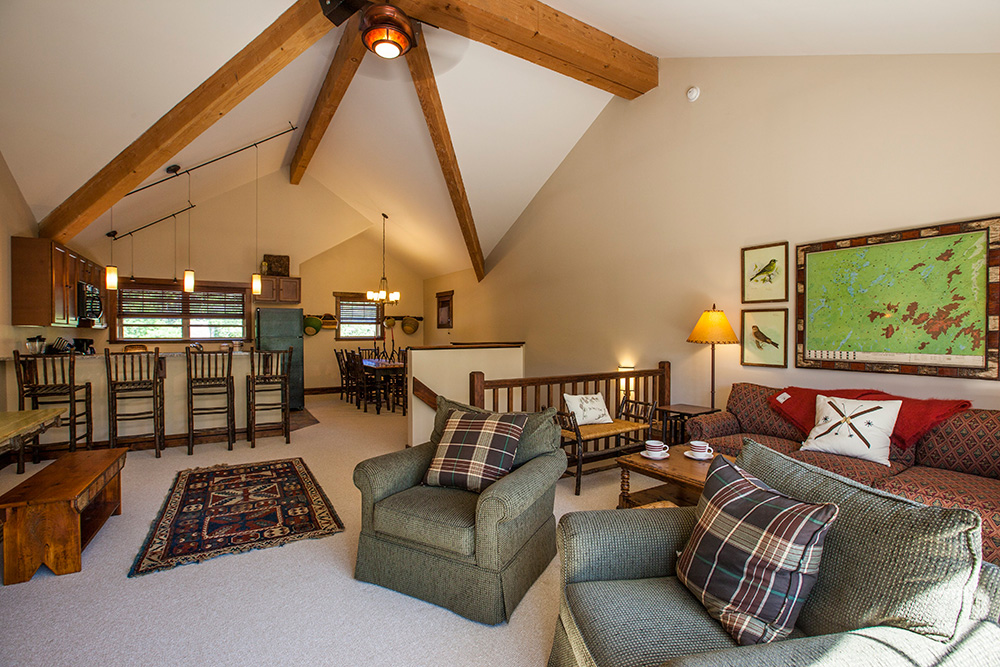 An Owaissa Club Townhome makes a perfect four season Adirondack rental home. 2 Upper Skyward Way is a 3 Bedroom 2 Bath townhome that sleeps up to 9 guests The views of Whiteface Mountain and the West Branch of the AuSable River are breathtaking. Whiteface Mountain was rated #1 in the Northeast by Ski Mountain and has more vertical skiing than Colorado’s well-known Vail Mountain Resort! Known as the only ski and beach community in the Adirondacks, the Owaissa Club offers guests four-season recreation. Enjoy spring fishing on the famous West Branch of the Ausable River. In summer, you’re just steps from the beach at the Lake Everest Day Use Area – perfect for fishing, hiking, boating, and biking. Come winter and the skiing at Whiteface Mountain cannot be topped. Fall hiking is outstanding with easy access to the High Peaks, and for winter fun, there are no townhomes closer to Whiteface Mountain. Entertainment is within close proximity as well, area shopping and restaurants – Downtown Lake Placid is just minutes from your townhome.
view gallery
Book Your Stay
view gallery
view gallery

At First Columbia, our mission is to deliver innovative real estate solutions that enhance our customers’ success, their enjoyment, and the value of their properties and space. We use Our Vision, Our Innovation, and Our Experience to create valuable and successful properties for the communities we enter.